“We are so pleased SPP’s board of directors approved terms and conditions for western RTO expansion,” said Bruce Rew, SPP vice president of operations. “This is one of the pivotal first steps to bringing the benefits of regionalization to utilities in the Western Interconnection, and we’re excited to work with both existing and potential new members to create a safer, more reliable grid and provide increased cost savings and benefits to members in both interconnections.”

“WAPA anticipates additional value in increasing energy transfers between the East and West through the SPP RTO, providing benefits and mitigating risk for existing and prospective RTO members along with our customers,” said WAPA Interim Administrator Tracey A. LeBeau. “We greatly appreciate the collaboration with SPP to work toward this critical milestone and look forward to continuing discussions around cost allocation for the direct-current ties and federal participation. We believe RTO membership is a viable option to enable continued reliable and economic electric delivery in this dynamic energy industry.”

If these utilities join or add additional facilities in SPP, they will become the first members of SPP’s RTO to participate in SPP’s Integrated Marketplace in the Western Interconnection. This would extend the reach and value of SPP’s services — including day-ahead wholesale electricity market administration, transmission planning, consolidated balancing authority, resource adequacy and more — and the synergies they provide when bundled under the RTO structure.

A recent SPP Brattle study found that WEIS participants’ membership in the SPP RTO would produce approximately $49 million in savings annually for SPP’s current and new members. The western utilities joining SPP would receive $25 million a year in adjusted production cost savings and revenue from off-system sales, and SPP’s members in the east would benefit from $24 million in savings resulting from the expansion of SPP’s market, transmission network and generation fleet. SPP’s prior calculations of the value of RTO membership suggest that these benefits are only a portion of those current and new members will derive. There is additional value not evaluated by the Brattle study including preserving reliability, achieving public policy goals, lowering reserve requirements, avoiding capacity expansion, regionalizing transmission planning, other processes and more.

In the Eastern Interconnection, SPP formed in 1941, implemented operating reserve sharing in 1991, became a certified reliability coordinator in 1997 and earned its RTO designation from the Federal Energy Regulatory Commission (FERC) in 2004. It launched its first real-time balancing market in 2007 then transitioned to a day-ahead market and became a single, consolidated balancing authority in 2014.

This experience and toolset has enabled SPP to operate reliably even as it has set numerous North American records for renewable integration, serving as much as 84% of its total system’s demand with renewable generation at certain points in time. Wind was SPP’s number-one fuel source for the first time in 2020. SPP began serving customers in the west in October 2015 when the Integrated System joined SPP and placed transmission facilities in the Western Interconnection into SPP. SPP subsequently expanded its services in the west in December 2019 when it launched its Western Reliability Coordination service on a contract basis and in February 2021 with the successful launch of the WEIS Market.

“Pursuing this opportunity has the potential to bring increased value to our membership,” said Paul Sukut, CEO and general manager of Basin Electric. “Our experience with SPP with our east-side operations has been positive and proven to Basin Electric the value of a full RTO membership and specifically the value of SPP’s stakeholder process. In addition, the involvement of state regulatory commissions, specifically with their authority in cost allocation and resource adequacy, has shown the value of SPP’s ability to reliably integrate diverse resources and keep wholesale prices the lowest of any RTO in the country.”

The next step to expand the RTO into the Western Interconnection is resolving the outstanding terms and conditions, including cost allocation for the direct-current ties between the Eastern and Western Interconnections. The remaining terms and conditions are expected to be resolved by the October 2021 SPP board of directors meeting. Prospective participants will also need to complete stakeholder processes.

Once accomplished, prospective participants plan to execute a financial commitment agreement in April 2022 to initiate the western RTO expansion. SPP then plans to file tariff modifications with FERC in October 2022 with approval expected sometime in early 2023. Once approved, SPP anticipates extend its RTO into the west March 1, 2024. 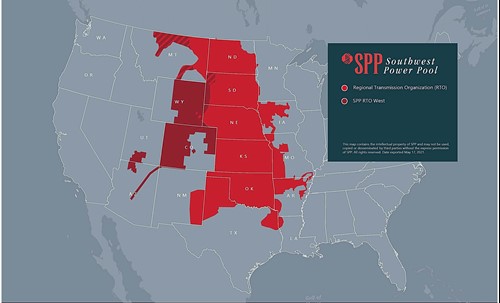 About SPP:  Southwest Power Pool, Inc. is a regional transmission organization: a not-for-profit corporation mandated by the Federal Energy Regulatory Commission to ensure reliable supplies of power, adequate transmission infrastructure and competitive wholesale electricity prices on behalf of its members. SPP manages the electric grid across 17 central and western U.S. states and provides energy services on a contract basis to customers in both the Eastern and Western Interconnections. The company’s headquarters are in Little Rock, Arkansas. Learn more at SPP.org.

About Tri-State:  Tri-State’s mission is to provide reliable, affordable and responsible power in accordance with cooperative principles. Tri-State is a not-for-profit generation and transmission cooperative with membership including 43 distribution cooperatives and public power districts that collectively serve 1.3 million people across nearly 200,000 square miles of the West, including the states of Colorado, Nebraska, New Mexico and Wyoming. For more information, visit www.tristate.coop.

About WAPA:  Western Area Power Administration annually markets and transmits more than 25,000 gigawatt-hours of clean, renewable hydropower over 17,000 miles of transmission lines to customers in 15 western and central states. It is part of the Department of Energy. Follow us on Twitter: @WesternAreaPowr or visit the website at wapa.gov.